Hard anodising was first developed by Russian scientists to produce a metal surface tough enough for space travel. The same technology is now used by ALU-FIN. Through a process of electrolysis at sub-zero temperature using a high intensity electric current, 35 to 100 micron thick layer of aluminium oxide (Al2O3) as per requirement is formed molecule by molecule as an integral part of the metal. This process produces a surface harder than steel.

Hard anodising produces harder coatings than the normal 'decorative' process, but the exact shade depends upon coating thickness and anodising conditions (which we can control), as well as alloy, thermal history, degree of hot or cold work, etc., over which we have no control. 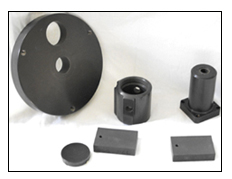